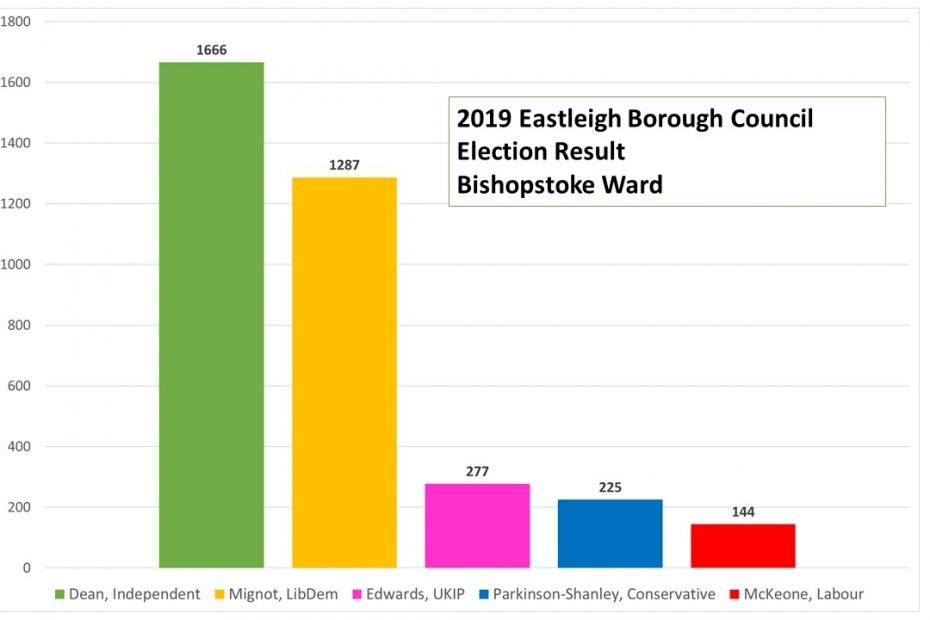 In 2018, Bishopstoke ward elected three independent Borough Councillors: Louise Parker-Jones, Gin Tidridge and Ray Dean. In 2019, Ray was re-elected with a larger majority – and that’s what this barchart (that has axes and numbers) is based on. And a LibDem has not won an election in Bishopstoke since 2017.

“Realising that local residents have taken the time and trouble to vote for us is remarkable. It shows that voting can and does make a difference. Because we are not members of political parties, we can each assess every issue without party leaders whipping us to follow orders. We work with other councillors all the time, putting the needs of the community first.” Cllr Gin Tidridge. “If you haven’t posted your postal vote yet, don’t forget that you can drop it off at a polling station tomorrow.”

This year, Gin is standing for re-election to the Borough Council – Eastleigh splits the councillors up in each ward so that one in three is up for re-election in most years. In 2018, there were all-out elections becasue of boundary changes and local elections were cancelled in 2020 because of covid19.

And this year, Cllr Louise Parker-Jones is standing for election to Hampshire County Council, hoping to represent Bishopstoke and Fair Oak ward. With Ray, she remains a Borough Councillor, representing Bishopstoke.

“I decided I couldn’t stand by while party politics played out at the expense of our amazing villages and environment. It’s been an incredible honour and very humbling to be trusted and supported by my local community. I want to make our area better for all, so I am standing for the County Council.” Cllr Louise Parker-Jones

But the independent story goes back to 2016 in Bishopstoke. This was when four residents decided to stand for the Parish Council because they could see how party politics could be damaging to the local community. Anne Dean, Johanna Francis, Gin Tidridge and Louise Parker-Jones all stood and were all elected to the Parish Council: 100% success.

Bishopstoke Parish Council was to have all-out elections in 2020, but these were postponed to 2021. The area is split into five wards, and in two, there is no election because of the number of candidates who came forward to stand (Underwood and Stoke Common). There are elections in the other three (Riverside, Itchen and Whalesmead). Anne Dean, Gin Tidridge and Ray Dean all stood for the wards without elections – so have already been selected.

In Whalesmead ward, Cllr Louise Parker-Jones is standing for re-election to the Parish Council. In Itchen ward, Ralph Candy and Susan Lynch are standing. Bishopstoke residents Dave Francis and Louise Hillier-Wheal are standing in Riverside ward.

Please use your vote. It counts, it matters and it can make a real difference.